Summary notes of Transition Metals and their compounds

Part One (Part Two is also found on the sidebar)


The notes found on this post are grossly inadequate for 2019 and beyond syllabus. So be forewarned. Students are advised to grasp the basics, then consult a university general chemistry or inorganic chemistry textbook.

** The toughest questions can be found from this chapter, which many teachers rush through due to insufficient time. Much reading is required.


Please note that the color spectrum and its related frequencies, wavelength, crystal field theory, Kstab are not discussed in these notes. You may want to study these concepts as this topic are highly important.

My notes are incomplete; I hope to improve on this post as this has turned out to be a popular post.

The transition elements have interesting chemical properties such as a variety of different oxidation states in their compounds, their extensive ability to form complexes, useful and often colourful compounds.

We shall only consider the first row transition elements.

A transition element is a d-block element that forms some compounds containing its ion with an incomplete d-subshell.

Strictly speaking, Sc and Zn are not considered to be transition elements.

You have to know the electronic configurations of the elements and their ions by looking at the periodic table. 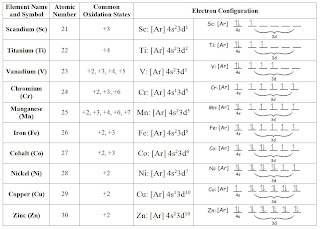 The 3d block contains ten elements, because the 3d subshell contains five orbitals, each can accommodate 2 electrons of opposite spins. All these elements involve the filling of the 3d set of orbitals.

Why? Symmetrical 3d cloud of electrons that screens the nucleus more effectively than the other configurations.

Before electrons occupy 4s and 3d, 4s is energetically more stable than 3d.
When 3d orbitals are occupied by electrons, they repel the 4s electrons even further from the nucleus and up to a higher energy level than the 3d orbitals.

Thus, the energy level of the 4s orbital is higher than that of the 3d orbitals.

Hence in forming ions, 4s electrons are removed before the 3d electrons.

Electrical conductivity : Very good conductor of heat and electricity.
Can use 4s and inner 3d electrons.


eg. manganese in its compounds can exhibit a range of oxidation numbers ranging from +2 to +7.

The metals and their compounds often show catalytic properties.

eg. In the Contact Process (wiki this, this is out of syllabus but came out in exam before), vanadium (V) oxide is used as a catalyst to convert sulfur dioxide into sulfur trioxide.

They have a strong tendency to form complex ions.

Why do the various transition metal ions have variable oxidation states?

Reason : Close similarity in energy of the 4s and 3d electrons. Hence, once the 4s electrons are removed, some or all of the 3d electrons may be removed without requiring much more energy.

In elemental states, elements assigned an oxidation number of zero.

Generally, ions that have the transition metal in a high oxidation state tend to be good oxidising agents.

You can use electrochemistry principles in determining Eθ cell and predicting whether a reaction is feasible.

Question : is there a redox reaction when V(NO3)2 reacts with KMnO4?

Transition elements, both in the form of elements and in their compounds, are important catalysts in organic synthesis and in chemical industries.

Definition : A catalyst is a substance that increases the rate of a reaction by providing an alternative reaction pathway which has lower activation energy than the uncatalysed reaction.

The catalyst takes part in the reaction but does not undergo any permanent chemical change after the end of the reaction.

The molecules adsorb onto surface of Fe catalyst.

The adsorption process bring reactant molecules closer together and in the correct orientation.

After reaction, product molecules, ammonia molecules desorb and diffuse away from catalyst surface so that active sites are exposed for further reaction.

Note:
Forward and reverse reactions are speeded up by catalyst. Products are not formed more in quantity, but more quickly.
A catalyst provides a different mechanism for the reaction, with a new, lower activation energy pathway.
A catalyst does not alter the enthalpy change of reaction.
Other catalysts: contact process, hydrogenation of vegetable oils to make margarine by catalyst nickel.

The ability of transition metals to vary their oxidation state is the key factor in their efficiency as homogeneous catalysts.
Iron(III) ions as catalyst.

The cations have low lying vacant d orbitals that can be used to accommodate the lone pair of electrons from the ligands, resulting in dative bond formation.

Complexes :
A complex is formed by a central ion ( or atom) dative-bonded by surrounding ions or molecules (known as ligands)
L --> M <-- L
A complex can be neutral, cationic or anionic.
In order to maintain charge neutrality in the compound, the complex ion is typically associated with other ion, called counter ions.
Complex and  electrolyte in solution.
Net charge:
Co-ordination number indicates the total number of dative bonds around the central atom or ion. The most common values are 2, 4 and 6.
Silver diamine compounds. [Ag(NH3)2]+ ions are used in carbonyl chemistry to oxidise aldehydes to carboxylate ions with the formation of a silver mirror or a silver precipitate.

Transition metal compounds are frequently coloured. This is due to the absorption of light in the visible region of the electromagnetic spectrum.

Crystal field theory:
In a free transition metal atom, all five orbitals have the same energy.
As the ligands approach the metal ion, their electron pairs repel electrons in the five d-orbital, causing all five d-orbitals increase in energy.
The ligands approach directly toward the lobes of the d x2 – y2 and d z2 orbitals but between the lobes of the dxy, dyz and dxz orbitals.

Energy of an electron in either the d x2 – y2 and d z2 orbitals is higher because of difference in  electrostatic repulsion. There is an energy gap between them. difference in energy.
Colours – low wavelengths – blue violet, green
High wavelength – red, orange.
d-d transition : Jumping of an electron to an higher energy orbital.
For most transition metal complexes, the delta E corresponds to energy in the visible energy region (400 TO 700 nm) of spectrum.

Why are Zn2+ ions non-coloured?

You need to know the Common transition metal compounds and their colours. IMPORTANT!

Why do transition metal ions show a high tendency to form complexes?

Is the formation of a complex a reaction between a Lewis acid and a Lewis base?

Shapes of complexes: You can use VSEPR model to predict the shape of the complexes. Common shapes are linear, tetrahedral, square planar and octahedral.

Popular posts from this blog

**This article is written by JC A level H 2 / H1 Chemistry tutor - Mr Chong** [This page was last updated on 21 Sep 2021] Hi JC H1/H2  students and international visitors,  Welcome to my blog. Section headings Introduction  2018, 2019  and 2020 Ca mbridge exam papers comments Biochemistry questions Arrow pushing mechanism in organic chemistry Organic chemistry   Group 17 (Group VII) chemistry Some topics to take note of Energetics Information for those aiming for a distinction in H2 chemistry in the year 2021 Chemical Bonding Exam revision How to tackle organic chemistry Optional Topics to Explore Introduction This blog may help JC (Junior College) students in Singapore to cope with the Cambridge-Singapore GCE A level (H2) assessment. Organic Chem occupies a distinctive and important position in the Singapore Chem syllabus. Thank you for your continued support of my blog. I am honored to serve you. You are free to look ar
Read more

Mr Chong
Hi! I am Mr Chong. I am a private tutor. I was an ex-school teacher in Singapore teaching chemistry. I have taught in a JC and a Band 3 secondary school. I have tutoring experience of about 20 years. I hope to help secondary school students and A level students achieve a good grade in chemistry. I graduated from National University of Singapore with an Honours degree in Science majoring in Chemistry. I have a teaching diploma (PGDE) from NTU-NIE. My students have consistently obtained good results in O and A level examinations. For tuition enquiries, please whatsapp / sms me at 82875873 or email me at chemguide8 at hotmail dot com View my blog: http://alevelchemistrysg.blogspot.com

Another tutor friend of mine

Tutor is located between TJC and VJC

Struggling in your chemistry studies? Want a grade boost? Want to do well for tests and exams?
Personalized and customised A level H2 Chemistry tuition is available, taught by an ex-JC tutor
Read More

Popular posts from this blog

**This article is written by JC A level H 2 / H1 Chemistry tutor - Mr Chong** [This page was last updated on 21 Sep 2021] Hi JC H1/H2  students and international visitors,  Welcome to my blog. Section headings Introduction  2018, 2019  and 2020 Ca mbridge exam papers comments Biochemistry questions Arrow pushing mechanism in organic chemistry Organic chemistry   Group 17 (Group VII) chemistry Some topics to take note of Energetics Information for those aiming for a distinction in H2 chemistry in the year 2021 Chemical Bonding Exam revision How to tackle organic chemistry Optional Topics to Explore Introduction This blog may help JC (Junior College) students in Singapore to cope with the Cambridge-Singapore GCE A level (H2) assessment. Organic Chem occupies a distinctive and important position in the Singapore Chem syllabus. Thank you for your continued support of my blog. I am honored to serve you. You are free to look ar
Read more